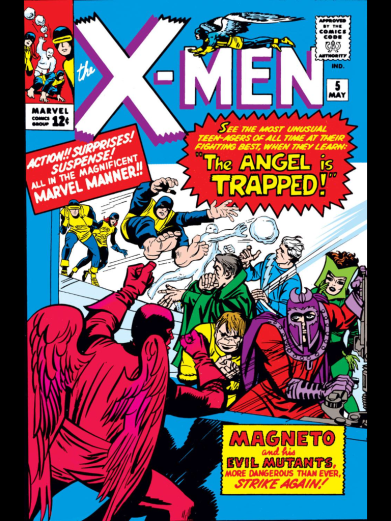 Brief Description: Abducted to Asteroid M! Magneto’s got an X-Man in his clutches and a team of underlings waiting for the rescue party!

After a few panels about the X-Men helping Professor X recover from his injury sustained in issue 4, this issue begins with a visit from an unexpected visit from Jean’s parents. This causes the X-Men to have to make sure the school seems as normal as possible.

After Jean’s parents visit, we see that Magneto’s new headquarters is on an asteroid in space. Magneto plots to find out where the X-Men are located by using Toad as bait. Magneto gives Toad a mask and Toad then competes in a nationally televised track and field event where he uses his powers to win every race. This use of powers outrages the fans and they turn on Toad. 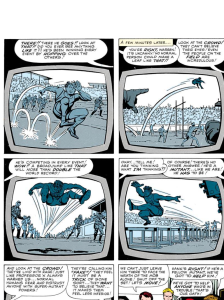 The X-Men suspect that this mystery racer must be a mutant so they rush to his aid, this time without Professor X’s aid. After saving Toad, they quickly discover who he really is and they are ambushed by Magneto and the rest of the Brotherhood of Evil Mutants. In the fray, Angel is captured and brought into space with Magneto. However Toad is left on Earth.

Toad is distraught and foolishly calls for a space capsule to bring him to base. The X-Men get in with him to try and save Angel. When on the ship, the X-Men battle the Brotherhood and are able to free Angel.

Frustrated, Magneto plots to kill the X-Men by launching them into space. However this angers Quicksilver and The Scarlet Witch and they stop him from doing so for as long as they can. However eventually he is able to launch Cyclops and part of the ship into space. Before Cyclops freezes and suffocates to death (It should have been instantly), Iceman creates an ice tunnel between their part of the ship and Cyclops’ part and Angel flies in and rescues him. The gang is then able to get back to Earth in an escape pod.

When they reach Earth Professor X reveals that he never actually lost his powers and that this has been their final exam as students of the Xavier School. He tells them that they all passed and now their training is over.

The First thing I’d like to throw out there is how ridiculous it is that Magneto has a space base. How did he get this thing up and running? I know he has magnetic powers and can maneuver metal but building a livable space station is still tough. 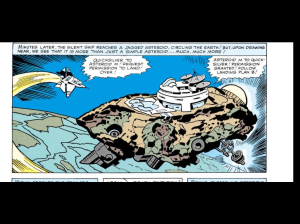 One thing I did like about this issue was the further characterization of Quicksilver and the Scarlet Witch. They disagree with Magneto’s extreme measures and defy him on multiple occasions. However they also do not feel like they belong with the X-Men because they X-Men keep attacking them. They do not know where they belong but they know that they don’t belong with these two groups. I can see the set up for the twins to leave and join the Avengers forming very fluidly.

Another important thing that happens in this issue is that the humans seem to have disdain for the X-Men for the first time in this series. The people at the racetrack are very quick to riot and try and attack toad at the first sign of power. People are also rude to the X-Men on the train after they rescue Toad. This may be the beginning of what is to come for the X-Men. People have famously always been wary of mutants in the comics and the government has frequently been openly anti-mutant. 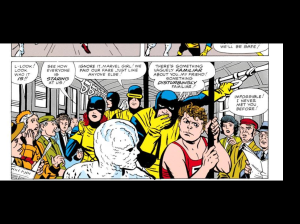 Speaking of that track race, it seemed way too coincidental that the X-Men happened to be watching a track race right when toad was in trouble. Was track popular back then? I don’t think it was.

I really enjoyed the reveal that this whole mission was a test from Professor X and that he never really lost his powers. It did seem silly that an explosion would make him lose his powers and the X-Men really did need to try and work on their own. It was a good plot device that worked well.

On a final note, this issue continued to hyperbolize Magneto to a ridiculous extent. Every time he is in a panel a narrator or a character call him the greatest mutant alive. 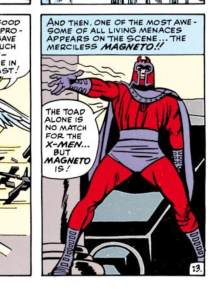 And also, this is a great use of Cyclops’ powers. 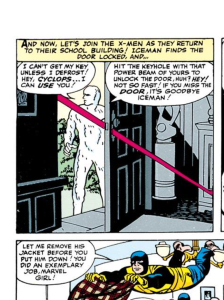