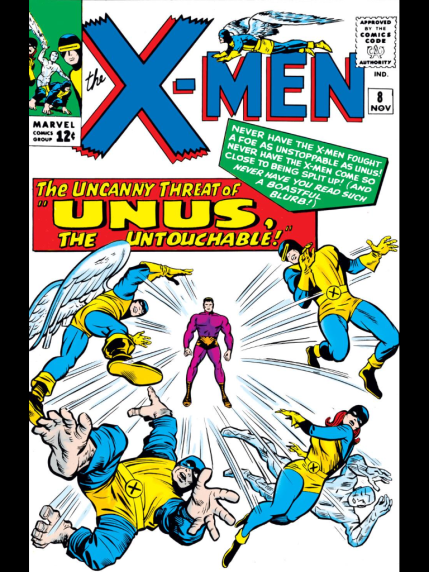 Brief Description: Fed up with ungrateful homo sapiens, the Beast leaves the X-Men to enter the wrestling ring! Too bad he finds Unus the Untouchable waiting to knock him down without lifting a finger! 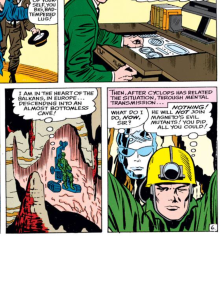 Lucifer: Although he doesn’t actually physically appear in this issue, Professor X mentions him for the first time when he tells Cyclops that he is in search of Lucifer. Contrary to his name, Lucifer is not actually the devil. He is an alien of the Arcane race. Lucifer is the one who made Professor X a cripple by dropping a large stone block on his legs.

-Powers: Lucifer is extremely intelligent and has invented a lot of alien technology. He acquired the ability to manipulate ionic energy and use this energy to increase his strength and leaping ability, create force fields, and create powerful concussive bolts.

Unus the Untouchable (Angelo Unuscione): Unus was born in Italy and became a wrestler when he moved to the United States. Unus has usually been a villain throughout the years and has frequently teamed up with the Blob.

-Powers: Unus has the power to generate of field of invisible psionic energy around his body that can deflect objects, energy beams, and can withstand great concossive force. He can control this force field at will.

This issue begins with Cyclops fully taking over the reigns from Professor X and training the X-Men. He is hard on his team, but they seem to begrudgingly respect him.

After training Beast saves a boy who is stuck on a tall building, only to be attacked by an angry mob afterwards for being a mutant. Angry at humanity, the Beast quits the X-Men and becomes a professional wrestler.

While wrestling Beast faces Unus the Untouchable who has the power to make it impossible for someone to touch him. Because of this Beast loses the match and Mastermind tells Unus that he can join the Brotherhood of Evil Mutants if he proves himself.

Unus than faces off against the X-Men to prove his worth and they find it impossible to defeat him since they cannot touch him. However Beast finds a way to defeat Unus by blasting him with a ray beam that increases his powers so Unus himself cannot touch anything. Unus begs and pleads beast to make his power weaker and Beast does so on the condition that Unus never uses his powers for evil. Beast rejoins the X-Men after the battle.

This issue brings on an interesting and new concept with the storyline of Beast leaving the X-Men. The humans are finally shown hating the X-Men solely because they are mutants and this is the first time that one of the X-Men begins to resent this mistreatment. This will be a common theme throughout X-Men.

This issue also continues to show the feelings between Cyclops and Jean Grey. Cyclops does not want to share his feelings for Jean though because he is leader now. 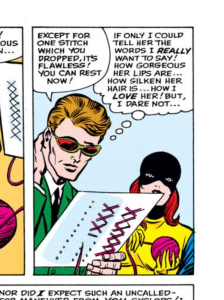 I only have two problems with this issue. One is Beast’s silly power increasing ray. How did he make this ray? Could this ray improve all powers? And if so, why don’t they all use it? It seems like an easy out for the X-Men and I doubt this ray will be used again, even though it could be helpful in other fights.

My second problem is the fact that Beast thinks he needs to keep his plan a secret from the X-Men. The X-Men all think he is betraying them and all Beast has to do to dispel these thoughts is to tell them his plan but he doesn’t. I don’t see any logical reason why.

1. Beast’s wrestler name is Beast. Really? Wouldn’t that obviously give away his secret identity?

2. The X-Men randomly have another helicopter in this issue. I want the X-Jet!

3. This issue ridiculously shows Professor X in a cave underground looking for Lucifer. How did he get there? However I’m excited for the Lucifer story to play out and to learn more about Professor X’s past.