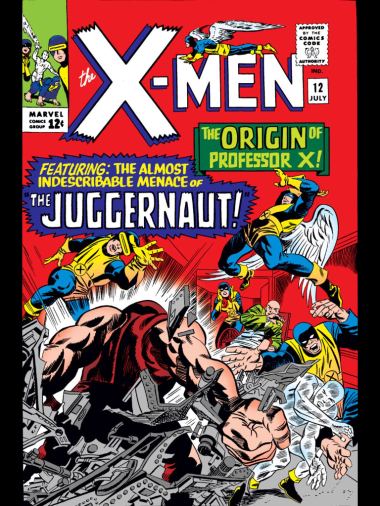 Brief Description: It’s always awkward to have relatives crash at your place, especially when they’re knocking down the walls! First appearance and origin of Professor X’s stepbrother, the Juggernaut! 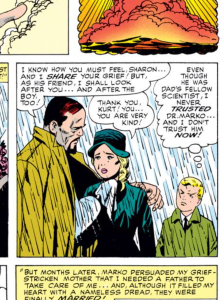 *Sharon Xavier: Sharon is Professor X’s mom and not much is known about her. She died young. 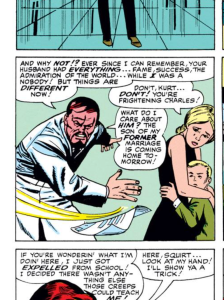 *Kurt Marko: Kurt Marko was Professor X’s father’s old partner and married his mom when Charles’ dad died. He was a mean and terrible stepfather. 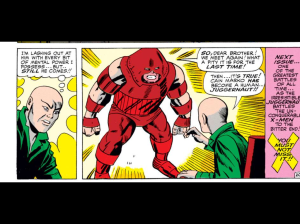 *Juggernaut (Cain Marko): Juggernaut is Professor X’s stepbrother. Juggernaut was always jealous of Xavier as a child and was always very mean to him. While fighting for America in Korea, Juggernaut finds a huge ruby that grants him the power of the Crimson Gem of Cyttorak. This gives him extreme strength.

-Powers: The ruby theoretically made Juggernaut immortal and gave him enough superhuman strength to shatter a mountain with a punch or to use buildings as weapons. He also has extreme durability. Juggernaut is able to survive without food, water, or oxygen and also heals quickly.s

In this issue, Professor X is alerted that his stepbrother, Juggernaut, is on his way to the mansion. Fearing for the safety of himself and his students, Professor X has the X-Men prepare traps to try and stop Juggernaut. 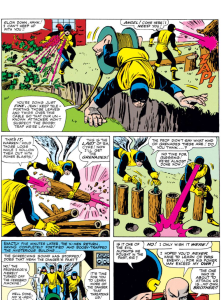 Then as Juggernaut approaches the mansion, Professor X tells the X-Men about this new villain. When Charles was young, his father died and his mother remarried a man named Kurt Marko. Kurt was an evil and abusive man who Charles always hated. When Kurt moved in with Charles and his mom, he brought his son Cain who constantly bullied Professor X because of the young Juggernaut’s jealousy.

Professor X tells the X-Men that he and Juggernaut served in the Korean war together and during the war, Juggernaut found a secret temple containing a mystical ruby that brought him incredible power. However, Juggernaut is crushed in rubble as the temple collapses and Professor X hadn’t seen his stepbrother since.

When the Professor finished his story, Juggernaut finally reaches the mansion and breaks into the room approaching Professor X. This is where the issue ends on a cliffhanger.

This issue wasn’t perfect though. There were a few things that were a bit off about the issue. Although I loved the backstory from Professor X, it seemed strange that the Professor was telling the X-Men this story now instead of further preparing for the inevitable attack from Juggernaut. He told them that he needs to tell them the story so they will be prepared for Juggernaut, but I don’t think the story made them any more prepared for the battle.

The other thing that I thought was a bit ridiculous about this issue was that it showed that Professor X was good at sports because of his telepathic power. Even if you could read the minds of your competitors, it wouldn’t make you the best at every sport. 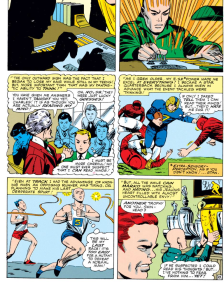 Overall, I really liked this issue because of the backstory but I wish there was more present tense action in the issue as well.

1. Kurt Marko knew about Professor X’s powers somehow. I wonder if we will learn more about Kurt later. He also died saving his son and Professor X. Maybe he wasn’t all evil. 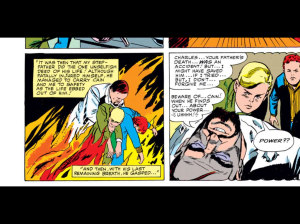 2. Juggernaut’s name is Cain and that is definitely a very biblical reference about being the bad brother.