Brief Description: The X-Men break into Lucifer’s base to stop him from enslaving the human race with the mysterious device called Dominus.

In this issue, the X-Men reach Lucifer’s base in the Midwest and face off against the alien. When they arrive at the base, Professor X sends the X-Men to penetrate the base on their own while he waits outside and monitors their progress telepathically.

As the X-Men approach the base, they are attacked by a group of ranch hands who heard about Unus and Blob’s burglaries (See my review of issue #20) and think that the X-Men are bad guys. 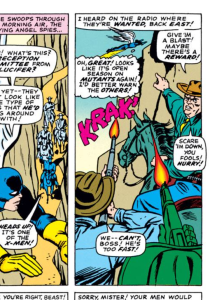 After defeating the ranchers, the X-Men enter Lucifer’s base through a river but as soon as they are inside, they are incapacitated by a whirlpool and then imprisoned. Meanwhile, Professor X is captured by robots and brought to Lucifer. 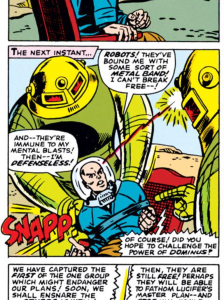 While captured, Professor X is able to get Lucifer to tell him his plan. Lucifer plans on using a supercomputer called Dominus to take over the world. The machine has been used many times over the years to enslave other planets. 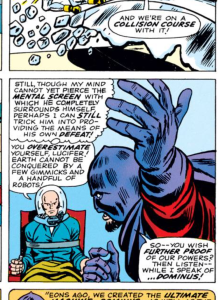 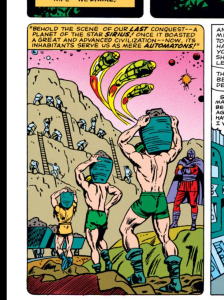 Eventually the X-Men are able to escape and they destroy all of Lucifer’s robot army. Once Lucifer is defeated, the villain’s alien commander sentences Lucifer to banishment in a different dimension for his failure to enslave the Earth.

Issue 21 was another solid issue for Uncanny X-Men. I liked seeing civilians attack the X-Men again and the overall story was solid.

The only major problem I have with this issue is Dominus. I’m not exactly sure what Dominus does. It was mentioned at least once that Dominus does some sort of mind control thing, but it is never fully explained. This machine apparently has the power to enslave a whole planet, but I don’t know how it does this. And I doubt that this machine would be able to take over the Earth without any of the superheroes stopping it.

One problem I’m starting to have with Uncanny X-Men in general is Beast’s vocabulary. I understand that Beast’s big words are part of his character, but it’s starting to get annoying. I wouldn’t mind Beast having some more panels where he talks like a normal person.

Overall this issue was a pleasant issue to read. With Lucifer being imprisoned in a different dimension I wonder when we will see him again. Magneto was able to escape his prison pretty fast. I hope Lucifer doesn’t disappear for too long.

1. For some reason, the robot shown on the cover is green but the robots in the issue are yellow.

2. Iceman calls Angel out on being materialistic. Also this panel shows some more Cyclops-Jean drama.

3. Iceman’s incapacitation of this rancher is hysterical.

4. Iceman continues to imitate other heroes. This time he resembles Silver Surfer.