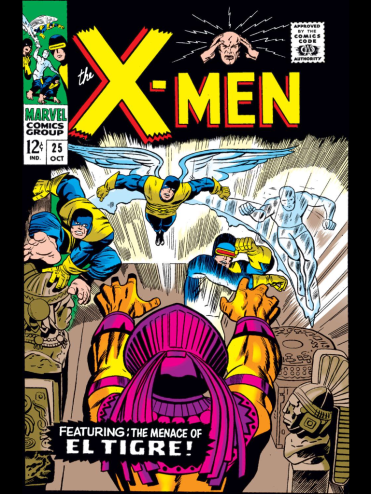 Brief Description: The X-Men face off against a man wielding the power of an ancient Mayan god.

*El Tigre/Kukulcan (Juan Meroz): El Tigre is a Latin American gem hunter who discovers mystical gems that give him power of the Mayan god Kukulcan.

-Powers: His original powers are the ability to use his mind to cause things to happen to both inanimate objects and to people.

This issue begins with the X-Men saving orphans from a burning building while they are on the way to drop Jean back off at college. 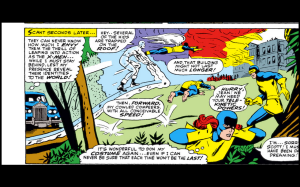 While they are saving the children, we are introduced to a character named El Tigre who just discovered a magical amulet for the Mayan God Kukulcan. The amulet gives El Tigre the power to control the world around him. He is able to control inanimate objects and even his henchman. El Tigre finds a Mayan inscription that says that with both halves of the amulet he found, he will have all of the powers of Kukulcan.

El Tigre discovers that the other half of the amulet is in a museum in New York so he and his goons head to the United States. Cerebro senses El Tigre’s power when he reaches the US and Professor X sends the X-Men to find him.

After a long search, the X-Men confront El Tigre and his goons in a museum, but the villains defeat all of the mutants. The issue ends, with El Tigre putting the two pieces of the amulet together and gaining the full powers of Kukulcan.

I found this issue to be pretty boring. Nothing really happens for most of the issue. I didn’t find the orphanage rescue that exciting (Mainly because I knew that the X-Men would easily save everybody) and there was more time spent looking for El Tigre than fighting the villain. I can only stand so many panels of the X-Men in civilian garb searching through the streets for villains.

This issue really felt like a set up issue. The whole issue is used to make a bigger, more exciting next issue. Roy Thomas is trying to create suspense with this issue, but I did not find the suspense compelling. I know that the X-Men will defeat El Tigre easily next issue so I am not worried for their safety.

This comic is the first one where Jean does not help with the main villain and her presence isn’t missed too much. At this point in the comics, Jean’s powers are very limited and she is one of the weakest members of the team.

Overall, El Tigre is a boring villain with vague powers and I am not looking forward to the next issue, although I assume it will be better than this one. It really is a shame that this issue is so bad, because I’ve been enjoying Roy Thomas’ run so far. I hope the quality returns to his early issues soon.

1. The Cyclops-Angel-Jean love triangle continues, but it seems like Angel may be bowing out.

2. The X-Men take a taxi for some reason.