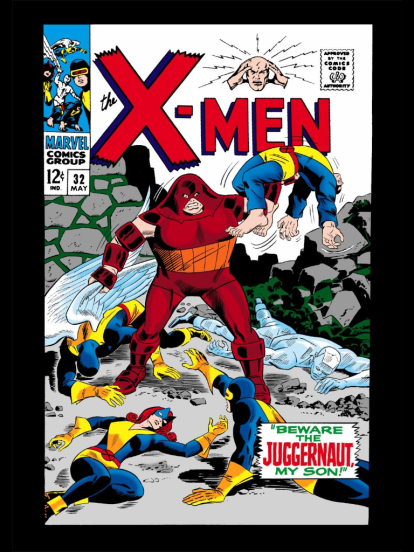 Brief Description: The X-Men celebrate Bobby’s 18th birthday but the celebration is cut short when the Juggernaut returns!

This issue begins with the X-Men celebrating Iceman’s 18th birthday at the beatnik club that Bobby and Hank like to go to with their girlfriends. 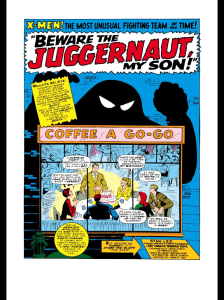 However as they are celebrating, a motorcycle gang rides their bikes into the club and attacks the X-Men because the leader of the gang thinks that Iceman stole his girl. The X-Men use their cunning to defeat the bikers without using their powers, so that they will not reveal their secret identities.

While the party and the scuffle are going on, it is revealed that Professor X has been keeping Juggernaut locked away in the mansion and that the villain is in a coma.

Professor X has developed a device that he hopes he can use to get rid of Juggernaut’s powers, but when the Professor tries to use the device it backfires. Professor X is rendered unconscious and Juggernaut gains Professor X’s mental abilities. 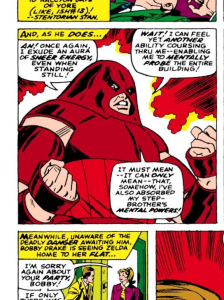 When the X-Men return to the mansion from the party they are ambushed by Juggernaut and the villain is able to defeat the team and render them unconscious. Juggernaut is about to destroy the mansion and kill the team when he hears a mysterious mental voice telling him that Factor Three are responsible for his escape and that they want Juggernaut to join them. 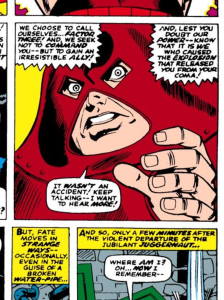 Juggernaut floods the mansion by bursting a pipe and leaves. The X-Men are able to avoid drowning, but Professor X is unconscious and on the verge of death when the issue ends.

Thank God Juggernaut returned because the past two issues were terrible. This issue was not perfect, but it is impossible to have a bad issue that involves Juggernaut.

I really enjoyed the birthday scene in the beatnik club. The club and its occupants are a great running gag and it was nice to see the team having fun together.

And at the party Cyclops and Jean danced! They are very close to getting together, as shown by many panels in this issue. Unfortunately Marvel will probably put their coupling off for as long as they can though.

I am intrigued by Factor Three being involved with Juggernaut. At this point in the comics they are still a mysterious group and I can’t wait until their secrets are unraveled.

My main problem with this issue are Juggernaut’s new telepathic powers that he got from Professor X. Juggernaut did not need new powers to make him stronger. He is already one of the X-Men’s most powerful villains. Hopefully he can’t use Professor X’s powers for long. Maybe they will go away when Professor X regains consciousness?

Other than that though, this issue was pretty solid. It was not as good as the other Juggernaut issues, but it was still a good read.

1. Iceman gets to have the first kiss of Uncanny X-Men! With his girlfriend Zelda. 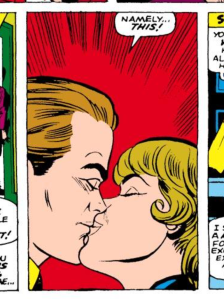