Brief Description: The X-Men receive a mysterious message from Banshee to beware the spider. Could Spiderman secretly be behind the disappearance of Professor X?

This issue begins with Banshee flying through Europe looking for Factor Three’s secret headquarters. Banshee is able to discover that Factor Three’s hideout is in a mountain, but a mechanical spider attacks him as he approaches the evil headquarters. 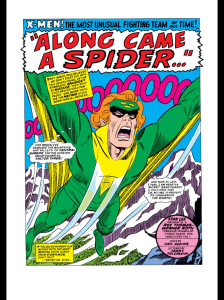 Banshee flees to his own headquarters and is able to send a message to the X-Men saying “beware the spider” before he becomes unconscious and is captured by Factor Three.

Meanwhile, Peter Parker is taking a leisurely drive through Westchester when he is also attacked by a mechanical spider. After a brief scuffle with the robot, Spiderman defeats his foe and the mechanical villain blows up. 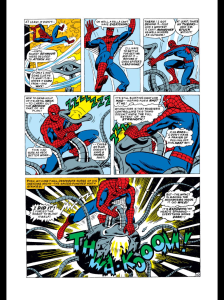 At Xavier’s mansion, Cerebro goes berserk when the spider robot attacks Spiderman and the X-Men go to Peter’s location to investigate. Believing that Banshee warned the mutants about Spiderman, the X-Men attack Peter believing that he is responsible for Professor X’s capture.

After fighting for a while, the X-Men realize that Spiderman is not really a bad guy and they return to the mansion. The mutant teens are able to discover where Factor Three’s headquarters is by tracking Banshee’s whereabouts and the X-Men get ready to head to Europe to save Professor X.

This issue was a big step up from the last issue. Spiderman has always been one of my favorite heroes and it was great to see him face off against the X-Men. It was also great to see the return of Banshee, even if it was for only a few panels.

Although this issue was solid, I had two major issues with it. My first problem with this issue is the same problem I have with every comic where superheroes fight each other. Why did the X-Men assume that Spiderman was evil and why did they have to fight the web slinger? All the X-Men had to do was ask Spiderman what was going on and he could have explained everything to him. But just like in every other hero vs hero comic, the X-Men attack first and ask questions later.

I know that the comic writers do this just to give them an excuse for heroes to fight each other and I do think that it is entertaining, but I wish the writers could think of better reasons for the heroes to fight. There is never any drama in a hero fight because you know that in the end they will both realize that they are fighting for silly reasons and the fight will end in a draw.

My other problem with this issue is that it is more of a Spiderman comic than an X-Men comic. Spiderman gets way more panel time then the mutants in this issue. I love Spiderman and I know that he is more popular than the X-Men (Especially at this time in comic history) but when I read an X-Men comic, I want the story to be about the X-Men.

All in all I enjoyed this issue, but I hope Spiderman teams up with the X-Men next time instead of fighting them.

1. The X-Men apparently have a limo. 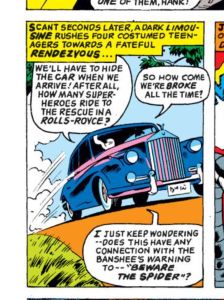 2. It is ridiculous that Cerebro senses robots just because mutants created them. 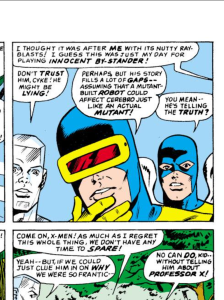 3. There is some more Jean-Cyclops stuff in this issue as per usual. 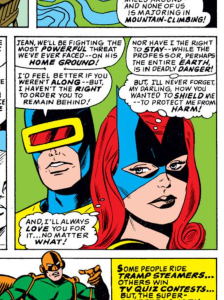 For more X-Men team ups click on this team up link! Team Up