Brief Description: The X-Men race to stop Factor Three from causing World War III, but will they be able to save the day with Blob and Vanisher in their way? Also, get ready for some background information on the origin of Professor X!

This issue continues the saga of Factor Three and as the issue begins, the X-Men have to split up to try and stop Mutant Master’s plans from succeeding.

Cyclops and Iceman head to an American missile base to destroy all of the missiles before Factor Three can capture them. They succeed in taking out the missiles, but their storyline ends in a cliffhanger as to what the military will do to them now that the two mutants have attacked their base.

Meanwhile Jean, Beast, and Angel head to a Soviet headquarters to stop Factor Three from blowing up the Russian leaders. When they reach the Soviet base, they are attacked by the Russian army and by a Factor Three battalion led by Vanisher and Blob. Before they can disarm the bomb, the X-Men are taken prisoner by the Soviets, and so is the Blob.

The issue then shifts to a whole different story about how the X-Men are formed. We are shown how the humans reacted when they first discovered mutants. It turns out that Cyclops is the one who caused the first mutant panic when he saves civilians from a following construction beam.

The FBI are planning on tracking down the mutants, but Professor X convinces them that he should be the one to track down mutants because he is one himself. The FBI and Professor X make a deal and the FBI allow Professor X to handle the “mutant problem”.

This issue was another horrible issue. Factor Three is really boring me. Their threats of creating World War III are not even remotely scary because we all know that the X-Men will stop them in time. Because this is so obvious, it is unbearable that Roy Thomas has decided to extend this storyline as long as possible by having half of this issue devoted to irrelevant backstory.

Professor X’s backstory with the FBI was very boring and we already heard about this story before in previous issues. It seems like a very random time to add backstory.

Even the Vanisher and Blob are rendered yawn worthy in this issue. Neither of them really puts up much of a fight and the X-Men are able to defeat them both in only a few moments. Are these two really amongst the toughest foes that the X-Men have faced? They certainly don’t seem like it in this issue.

My biggest problem of all though with this issue was that Mutant Master is one of my least favorite villains. He has no personality. He is a very bland villain. He might as well just be named “Bad Guy”.

The only thing I liked about this issue really was this great panel of Beast pummeling some Soviet soldiers.

A few final notes (Get ready for even more ridiculous things about this issue):

1. Beast is able to sense that there are bombs beneath the floor because his feet can “sense” the bombs. Really?

2. There is more Jean longing for Cyclops stuff. 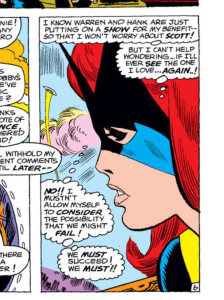 3. Angel continues to be full of himself.

4. Jean stops Vanisher from teleporting by making him dizzy. If this is all it takes to stop Vanisher he is one of the worst villains ever. 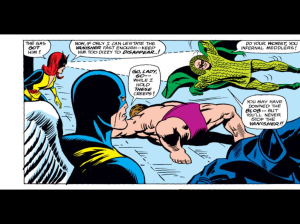 5. Professor X is a Jedi Master.