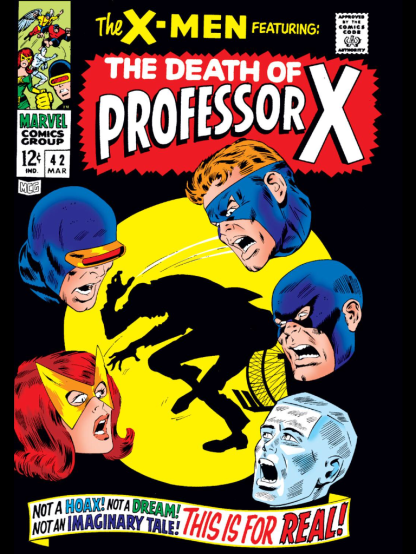 Brief Description: Could this really be the end of Professor X? The X-Men’s battle with Grotesk ends with large consequences for the team.

This issue begins with Angel and Iceman angrily confronting Jean about the Professor while Beast and Cyclops face off against Grotesk. Angel wants Jean and the Professor to help out in their fight with the sub-human monster, but Jean and Xavier refuse and won’t tell Angel why. 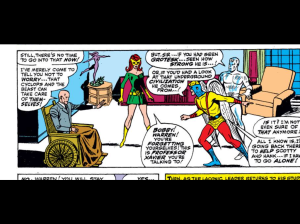 When they arrive they discover that the Professor is missing. It turns out that Professor X has decided to face off against Grotesk alone so as to not endanger his team. Professor X tries to use his mental bolts to stop the monster from turning on a device that will destroy the Earth with atomic earthquakes, but Grotesk is too strong.

The rest of the X-Men join Professor X in battling Grotesk and are able to distract the villain enough for Professor X to stop the machine from destroying the Earth. Angered, Grotesk tries to fix the machine but ends up blowing it up instead. The explosion kills Grotesk.

As Professor X is dying, he let’s the X-Men know that he knew he was dying of a disease before this mission and that is why he tried to face Grotesk alone. The Professor then dies.

When the Living Diamond reaches the Professor, Xavier uses a ray beam to atomize the villain and the villain dies.

Professor X then brings Cyclops back to the mansion and he tells Cyclops that he wants to form a new school of mutants with Scott being the first student. Cyclops agrees to join the school and Professor X gives him his first uniform.

This issue was thankfully better than the past few. It was a very dramatic first death of Professor Xavier and even though I know it was actually Changeling who died in the explosion, it was still poignant.

I also really liked all the hints that Professor X was not exactly who he seemed to be. When it is eventually revealed that Changeling took Professor X’s place, it won’t seem that unreasonable with all of the hints that Roy Thomas has been giving us.

Grotesk was still a boring villain in this issue, but killing the Professor definitely elevated his status as an evildoer. However, I am glad that Grotesk died and will probably not be returning to the X-Men any time soon.

The Cyclops-Living Diamond story ended rather abruptly, but I was satisfied with the end of the Living Diamond saga. If these prologue stories continue, it will be nice to still have Professor X in the story even though he is “dead”.

There was nothing in particular that I really disliked about this issue. It was pretty solid and I hope the next issue continues to be good. I have high hopes because Magneto will be returning!

1. Cyclops shows a bit of the attitude that frames modern Cyclops’ thinking and Jean gets to levitate Scott in the air.

2. Angel has sunbeam shooter things for some reason.

3. This final panel of the main story is pretty dramatic and great.

4. Cyclops gets his superhero name!

5. And Cyclops continues to hope that he will lose his powers.